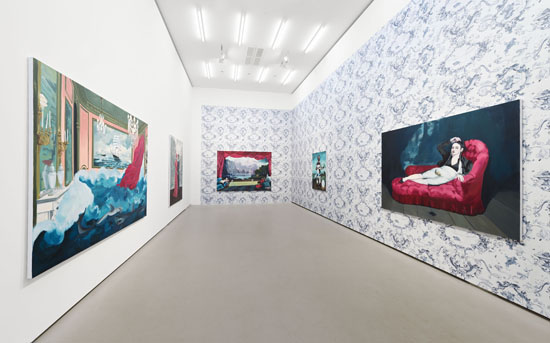 „A wooden wagon bursts into flames, a muscle-bound pack of hunting dogs attacks a snarling wolf, white sharks circle in a foaming sea, unmanned drones circle a plume of gray smoke—all within the serene confines of well-appointed sitting rooms, tastefully decorated and carefully rendered. Melora Kuhn's painting is concerned with the tension between stability and chaos, between idealistic visions and the means used to realize them. Rich with historical, political, and psychological allusions, her work engages directly in a dialogue with the masters of Western painting. She studies and absorbs images of the past with a contemporary understanding of how history leads to the present. The artist works by selection and arrangement, emphasizing the specific American character of these paintings through her choices. She follows her intuition and interest while keeping a keen eye on concept and critique. She reduces her sources to their essential qualities and gestures, at times using expressive brushwork and lush paint while at other times being precise and illustrative in order to make her point. Kuhn was raised in eastern Massachusetts, not far from the first battlefields of the American Revolution. The region later became the birthplace of writers important to the history of American letters—Emily Dickinson, Nathaniel Hawthorne, Ralph Waldo Emerson, Henry David Thoreau. She swam with friends in Thoreau's fabled Walden Pond and was immersed in the official narratives of American history. Kuhn now lives in the Hudson River Valley of New York State. In the nineteenth century, artists of the Hudson River School painted romantic landscapes of the American countryside. Immensely successful at the time, they influenced the popular imagination of the American West through large-scale traveling exhibitions showing the glories of westward expansion. The artist takes all these historical influences into her painting, simplifies some, expands on others, and combines them with her own experience to create layered contemporary works." Marc Lepson in: Melora Kuhn, Exhibition catalogue., Berlin, 2015

The exhibition at Galerie EIGEN + ART Berlin is accompanied by a catalogue with a text by Marc Lepson and an interview with Gregory Volk.

Melora Kuhn (born in 1971 in Boston) studied at the School of the Art Institute of Chicago. She has taken part in numerous solo and group exhibitions, primarily in the United States. She lives and works near New York City. This show is the first extensive solo presentation of Melora Kuhn in the Berlin venue of the Galerie EIGEN + ART Leipzig/Berlin after her admission to the gallery program in the past year. 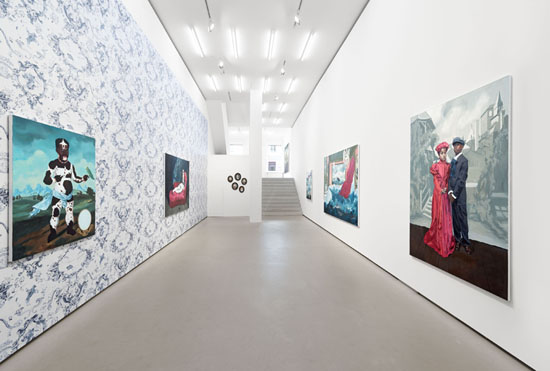