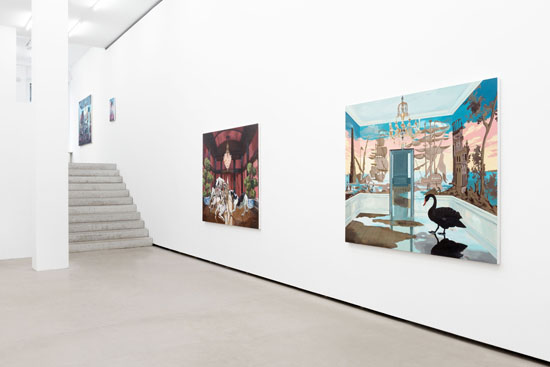 Melora Kuhn's works are a constant observation of people's experiences with themselves and in society. Kuhn makes use of the pictorial language of mythologies and history, in particular the pictorial forms of 19th-century American art history, from which she isolates individual pictures, and places them in a new context. Her interest lies in the details that were forgotten or elided in the narrative, in order to take a firmly established and well-known story in another direction and to inscribe a new readability into the personal biographies of the protagonists in her pictures. She often places the mild, classically portrayed persons in front of contrasting, destructive, black-and-white backdrops from pictures of current events. She thereby creates for each portrayed person an individual narration in which she ties personal to collective memory and lets historical events step out of the past into the present.

In her new works from the series "Reconstructing Histories", this second narrative level is added in a different way: across the scenery lie schematic contour drawings that turn the image into a picture puzzle in which one no longer knows what is in the front and what in the back or which story now actually corresponds to reality. 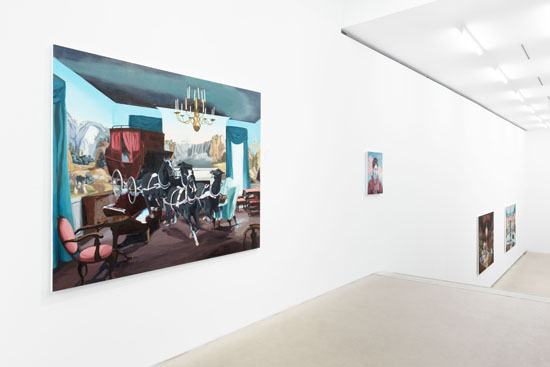 Tellingly, this is expressed in a portrait of Thomas Jefferson (Sally's Marks on Tom, 2013) that Melora Kuhn sets before a beautiful cloudy sky through which the sun breaks. Recognizable in a black drawing above his portrait is the figure of Sally Hemmings, a slave with whom Jefferson is said to have conceived six children, as evidenced by DNA tests done in the late 1990s. This second story, which in no way tallies with what the history books once transported, lies like a shadow on the glorious legacy of the third president of the United States.

In contrast to her portrait series, Melora Kuhn's new pictures turn to interior spaces that seem to be incorporated and overwhelmed by the story happening outside them. For example, a stagecoach that could have sprung directly out of a historical book of the 19th century, when they dashed through the Wild West, crashes through a curtain into a fancy salon, whose walls display the barren landscape of the Midwest, rather than fine tapestries. One pictorial space further, powerful English hunting dogs tear a scrubby coyote to pieces in a hall adorned with Asian porcelain. The coyote, which is no longer at home solely in America's prairies, but also in its big cities, where it is hunted as a pest and a threatening troublemaker, is venerated as a trickster spirit in Indian mythology. 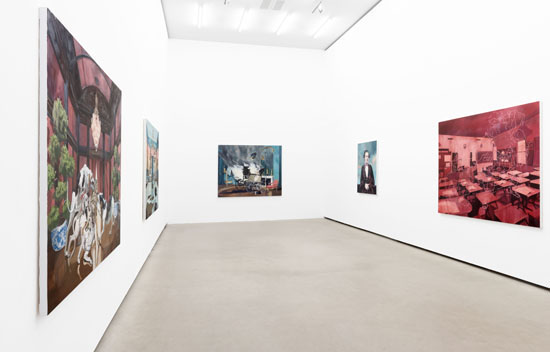 Melora Kuhn's involvement with American history is a continually growing process: "I'm just trying to understand how we got to where we are now, and how it may be able to be pulled apart to figure out a new order, or a new way."

Melora Kuhn (born in 1971 in Boston) studied at the School of the Art Institute of Chicago. She has taken part in numerous solo and group exhibitions, primarily in the United States. This is her first solo exhibition in Germany. She lives and works near New York City.