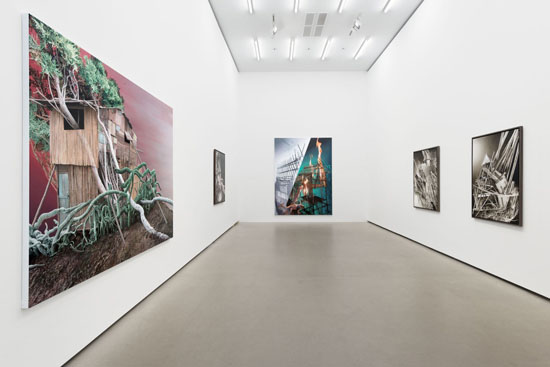 Mirjam Völker’s pictures show shacks that have long since lost their function as shelter and have become overgrown and entangled with countless branches and twigs. When Völker hoodwinks us, it is not just with optical illusions. The artist shows us the world behind the light, the world of shadows. In this world, horizons multiply, viewing angles blur. In this way, in the 2014 series Zwiespalt (ambiguity, conflict), an unexpected dividing line appears in the middle of the picture or, in Untiefe (depths), a tarpaulin stretched in unsuspected depths separates what is in front from what is behind. In this world, not only space, but also time oversteps its allotted boundaries, as in the recently executed painting “Zäsur” (caesura, break): in this world, airplanes crash, houses burn down, and no one knows whether the crash caused the fire or was a result of an attempt to extinguish the fire.

The artist works in colorful acrylic paintings and sometimes large-format charcoal drawings. In both her paintings and her drawings, she supplements the strict compositions with abstract forms and overlays various perspectives. The structures of the realistic, detailed drawings thus possess materiality, while graphic elements simultaneously lead to ruptures in the perspective. The light stages what is depicted, whereby the targeted illumination creates intense shadows and transparent areas.

With these technical means, a seemingly safe entrance to a shelter becomes an unstable ladder to uncertainty; powerful supports become wobbly stilts that are hardly able to withstand the wind, much less masses of water (Stützpunkt, 2013 – base, supporting point). Nests do not serve to protect their all-too fragile content, but to provide an unobstructed transition into endless depth (Zyklop, 2012 – Cyclops). In this world behind the light, innocence and horror lie close together and can hardly be distinguished. Völker “doesn’t want to conjure up any stories; her focus is on the moods”. “The situation’s qualities as an excerpt of the world1 and as removed from the site2” thereby become essential aspects of her artistic oeuvre.

As “removed from the site” as, for example, the pictures of windmills whose elevated positions provide an inkling of the forces of nature for which they are built: for the struggle with wind and tempest. Fire, too, comes dangerously close to them; for example, does the millwheel’s cross ignite at the first spark? The elements – water, fire, earth, and air – seem to play another, special role in Völker’s pictures. When they go out of joint, so do the shacks: in the drawing Abhang (downslope), a crashed helicopter is reflected in a puddle and a rickety house on stilts must bear up against steep terrain and a rotten tree. The plant is veritably sucked into the wake of the building, creeping upward and compacting its structure more and more. This world is in the middle of last-minute preparations – for an unknown danger.