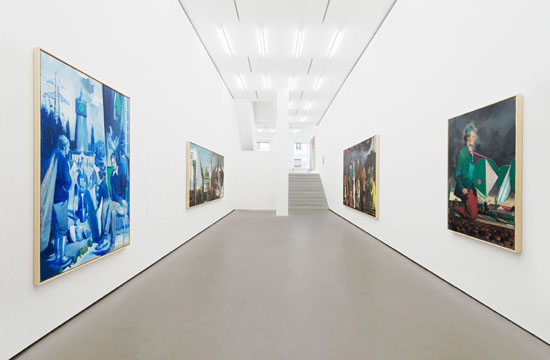 What do we believe in – in the possibility of a whole, even now, or only in the fragment anymore? Much of today's art is fragmentary in character. A dance of particles. Neo Rauch doesn't join in the dance. Those who open themselves up to his oeuvre enter a space that expands to be greater and more whole than a project or season. Maybe that is why some regard this painter as a provocation. Someone who doesn't resign himself to smallness, someone who wants to reach out grandly once more. That's not done anymore; it's not possible anymore? But he does it, so it's possible. Quod erat demonstrandum. It's not as if Neo Rauch never thought about leaving his cosmos and reinventing himself; he has done so often. But then the space of his art proved to be still too unexplored, too fertile, as well, too productive of figures and visions to abandon it out of boredom.

This space is not a mere idea, it actually exists: the studio. Among the works at this exhibition is one that takes us where the pictures come about. Neo Rauch often arranges what goes on in the pictures in or in front of landscapes, but this one picture is set in the studio itself. A scene entirely suffused in night blue. A man sitting, sunk in dreams or thoughts, in front of a large-format picture. We can assume it is the painter, even if he wields a sword rather than a paintbrush, but, like everything here, it is a blue sword; the man is fighting his nocturnal struggle with the weapon of Romanticism. And who else but their master and servant would be alone with his pictures at such a late hour? 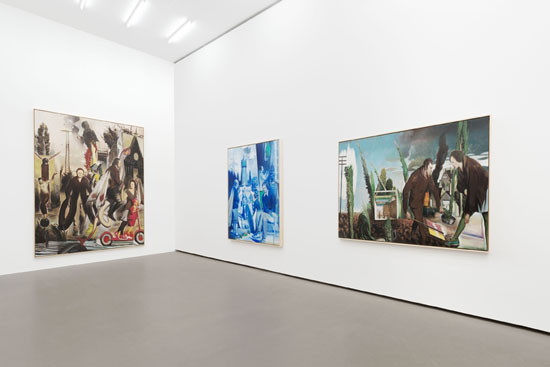 We are familiar from literature with such rather uncanny nights in which the daytime person dreams and what is inanimate during the day comes alive; here it is an intimate scene that gives us an inkling of how the pictures come to the artist, how willful and individual they are, how much power and skill is required to tame them and lead them into the arena of his canvas. Another state of being in the picture's background hints at how vulnerable their herdsman and tamer can be: a second man at the studio window, unarmed and giving himself up with closed eyes to something we can't see, sleepwalking on the invisible tightrope of a trance.

It is true that Rauch's cosmos in not entirely of this world, but the goal of the enterprise is not escapism. At least not in the sense that the painter would plug up his ears to avoid hearing signals from the world. It broadcasts incessantly into his studio; but as painter, he claims the right to respond to it with painterly means. There are forecourts of Hell. There, menials and henchmen do their work. "Versenkung" (sinking or lowering something/meditation or trance) is the title of a picture in which a man is carried to his grave. But what strikes us is the curious or suspicious gaze of the delinquent who is slated to be next in the doings of the grave – this is the side glance all of us cast on the events of a world whose helpless witnesses we are. One would have to be very oblivious to overlook the burning contemporaneity of this art.