The spatial design of Nicola Samorì's exhibition "In Abisso" already suggests a demarcation: a sharp line of division separating a white Above – the threshold – from a gray Below, the gallery room into which the visitor descends on a stairway. As in a loop, the starting point and endpoint merge into each other, and the sequence of pictures in the gallery is studded with references, mirrorings, and reflections that bring the works into dialog with each other, their creator, and the viewers. 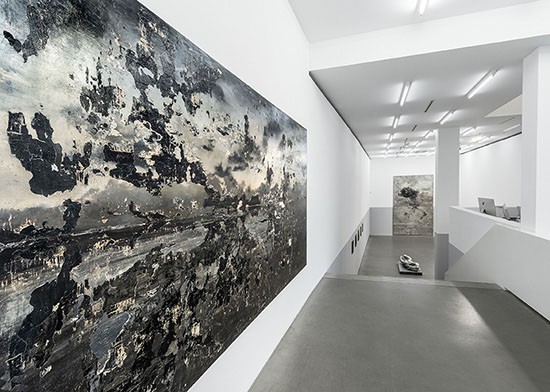 In the entryway picture "Ultima scena", a horizon becomes a multiple line of separation: a vision of the Straits of Messina, the passage separating mainland Italy from Sicily, inhabited in myth by Skylla and Charybdis, a mythological abyss in which ships and the merchants aboard them often sailed to their deadly fate when they saw land, but were only seemingly close to it. Samorì paints the picture in several layers of oil paint, then folds the still-moist canvas along the line that separates the sea from the sky, unfolds it again, but now spotted with traces of symmetrical randomness: the dark spots that appear on the background mix with the clouds; the underlying glimmer of light shows through to generate an artificial sunset; and chaos bursts the vision.

Nicola Samorì's relationship to the sources of his pictures is suffused with a continuous grappling with the history of visual art – not didactic, but substantive. His work as a painter and sculptor necessarily implies confrontation with this legacy, which nowadays is all too often regarded as unwieldy ballast. Samorì has no fear of the past or of his predecessors. He takes possession of them as role models and uses them to traverse the necessary path of knowledge and self-knowledge, using them as instruments to deconstruct their language and to found his own poetics.

The suggestive power of an art-historical icon can be so great that it is reworked again and again over the centuries; each work becomes a building block that gradually loses every component of recognizability, increasingly becomes one with its respective creator, and moves ever further away from the original work.

This is also the case with "Der Tod als Trommler" (Death as a drummer), a memento mori by the German sculptor Joachim Henne (ca. 1630-ca. 1707), a small ivory piece in the inventory of the Victoria and Albert Museum in London. As so often when he begins with a picture from art history, Samorì removes the picture's narrative components: the death's head and the cudgels that the almost surrealistic musician holds in his hands while he beats out his death rhythm. The viewer's attention is thereby focused solely on the almost symmetrical positioning of the body. Samorì starts from this structure to first produce a wax model of the figure and from it numerous replicas made of alginate. One of the models produced in this way, no larger than the palm of a hand, is transposed into a life-sized monument of Bardiglio marble. He succeeds in this with a virtuosity in which the hammer, chisel, and scalpel transport all the impurities and anomalies of the small model into the larger format, making them visible for the first time. 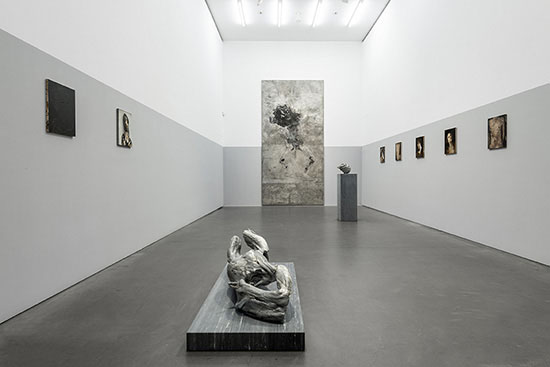 In the constant play of echoes and relationships, the drummer is also the pictorial source for the monumental fresco "Vincent" on the gallery's front wall. The symmetrical body is divided along the horizon line and moves in the exhibition architecture on the line of separation between above and below, light and dark, and salvation and damnation.

In the exhibition's painterly works, Nicola Samorì works with the natural flaws in marble and onyx slabs, with cavities, geodes, and aggregates in the material. The figures in his pictures fit these flaws, rather than hiding them; sometimes these imperfections are repurposed as eyes, sometimes they dissolve into blossoms or faces, and sometimes they imitate nipples. The motifs develop out of a physical defect or deficiency and often point to the martyrdom of biblical or art-historical figures: Lucretia, St. Lucia, or St. Jerome. And when the raw material is flawless, as in the case of Santa Lucia in white Carrara marble, then it the artist who, with his processing, inserts a disruption or anomaly: as in a surgical intervention, he implants natural geodes in the material's eye sockets. The act that blinds the picture opens the gaze of those who view it – for new interpretations of the canon.

From a text by Chiara Stefani
From Italian into German by Sabine Heymann; from German into English by Mitch Cohen 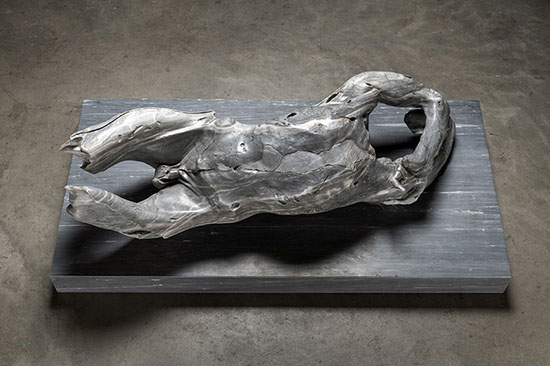