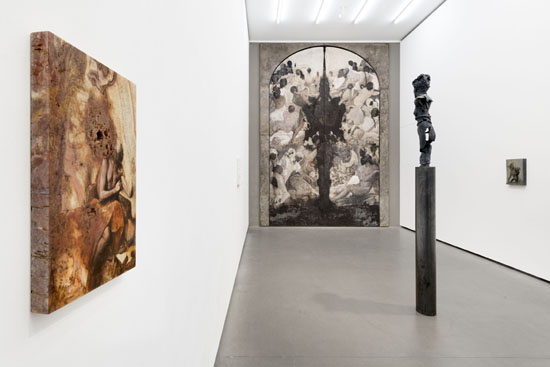 Nicola Samorì's human figures are frozen in fear. Their faces are darkened by a large abstract segment, a sinister source, a "poisoned well" coming from within the centreof the works: the "mala fonte". Framing the cavity, the figures are stricken with dismay, their translucent bodies are festered. A tempest appears to have dissolved them. The "mala fonte" is an unknown disaster, an erosion, a tragedy that can't be explained, something intangible. It is a mental composition, Samorì's works rely on: The feeling that fear is dominating our lives.

Malafonte, Nicola Samorì's first solo exhibition at Galerie EIGEN + ART Berlin, is influenced by an artistic period during which the emotional expression of fear has been ubiquitous. Between 1520 and 1600, the artists of Mannerism directly coped with tragedies such as Sacco di Roma, a violent depredation of the city of Rome. Works like Il serpente di bronzo by the Fiorentine artist Agnolo Bronzino were influenced by the pain the artist experienced. Fear was a condition of Mannerism. To Samorì, we are living in Manneristic times again.It is a new point of view the artist is taking – until now, he has been known for his intense analysis of the Baroque. 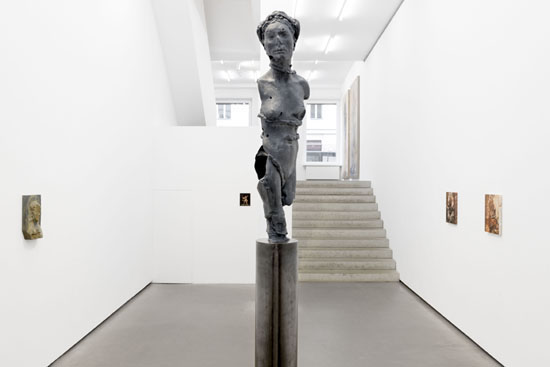 The influence by Mannerism in Malafonte is not only restricted to a state of mind. The serpentine figure of the human body, a characteristic of Mannerism, is a consistent subject of the works: Valle Umana (Malafonte), the large-scale fresco covering the entire back wall of the gallery visualizes this in the battle between the snake and the human body. Expelled from the centre of the fresco, the snake slithers from one work of the exhibition to the other: In the black Carrara marble sculpture facing the fresco, the snake has become the tail attached to a coccyx ascending the figure's body up to the tongue. In other works, the snake is trying to penetrate the void of the stone. In Chi è senza ossa non lascia traccia, a white Carrara marble high relief, the human figures take on the form of a tangle of snakes themselves.

Malafonte is an exhibition of minerals: It is a mine of precious stones, sand, lime and earth. By working with these materials, Samorì breaks with painting's tradition of using elastic, corpulent oil to depict the body. From a distance, the works seem to have been part of an act of vandalism. It is the contrary: Samorì does not create works in order to demolish them. Instead, it is the flaw, the stone's hole, the "mala fonte" that is the starting point of the works shown in the exhibition. The mineral wound is the beginning. 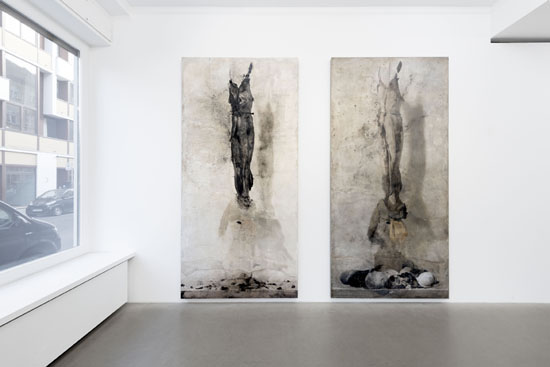 In 2015, Nicola Samorì visited the exhibition "The Lost Museum" at Bode Museum in Berlin, which included remains of damaged marble works caused by a fire at the museum in 1945. It was one of the most severe disasters happening to art works during the Second World War. In the show, the fragments blatantly visualize this destruction. To Samorì however, they never lost their powerful, original compositions. The holes and imperfections are reminiscent of what has been lost and ripped out. They demonstrate our cultural heritage.

The destruction of material can expand its traditional perception. In today's society, the image of perfection and beauty is well-defined. Samorì's view is a more inclusive one. A black spot on a white piece of marble usually means that it can't be used in the context of art. Yet, the imperfections are the factors that are telling the very individual story of the material. The marble used for the works Cunea and Caina shows traces of the weather conditions the mountain of which the marble was coming from was exposed to. Nature has left its traces on the material.

More than ever, life is supposed to indulge with its sleekness and perfect surfaces. The littlest imbalances throw people off the track. The fear of the unknown is dominating societies. It is an anxious, troubled state of mind. The artists of Mannerism dealt with a fear they directly experienced due to political situations in the countries they were living in. Today, the impacts on the feeling of fear are not reduced to a particular location. We can see what is happening anywhere in the world, immediately. We are all contaminated by images of war, violence and suffering. We feel surrounded by sickness. 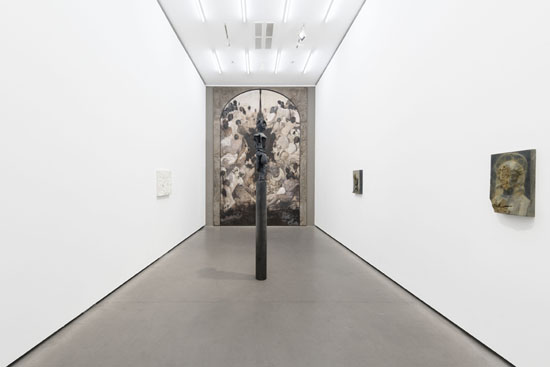