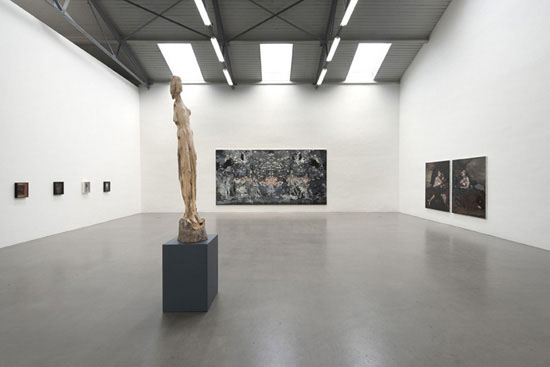 YOU CAN'T THINK I'M SO UNJUST IF I DO YOU WRONG1

And God saw the light, that it was good: and God divided the light from the darkness. And God called the light Day, and the darkness he called Night. And the evening and the morning were...2 There is no act more tragic and violent than birth. To take form, or give form, is a painful and overpowering act. To be confined by separation in a body, barricaded into the space of a pronoun. I, you. The fundamentals of the identity process. Since the myth of the garden, otherness is learned by contrast with lost unity. Now, in this garden – the garden of forms – we learn that every form is a commodity that costs.3 Price: desire, pain.

In art too, all genesis takes shape as a bloody act. Nicola Samorì knows this well, an indecent obstetrician of his works. In labour, one is dismembered into its multiples. As such every birth reproduces the first birth, and increasing the original multiplication reiterates the myth of creation and the stolen rib. Until the end of time, when the crowds will all converge at the point of Justice. The drowned and the saved borrowed from van Leiden, which Samorì shows to us through the vulval slit of his Janus: where the double (ambiguity of the archaic feminine) still cries, nailed to a singular body, soldered – impudently or hilariously – precisely on the thorny point of origin. 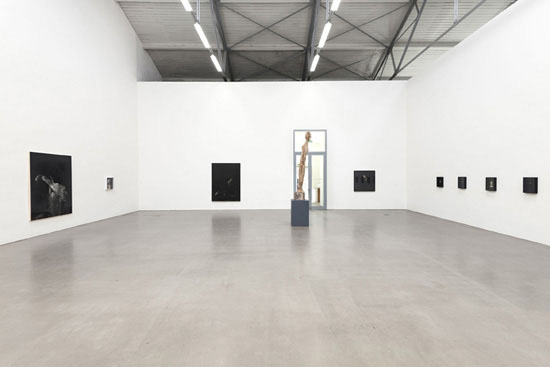 Samorì becomes the author and reader of this dismemberment. The bodies, the images, and the archetypes remain affected by it. But as ever, each separation is followed by the desire for reunion. The hermaphrodite amputated by the gods dreams of being reunited, as Plato teaches us in the Symposium. Even single-cell organisms are split by mitosis, splitting into two along an axis, and recombine by contact in the fusion of their genetic heritage. Intercourse, the embrace, the kiss are nothing but the sublimation of a similar desire. The attempt, constantly failing, to return to one, to regain unity after its fragmentation. Like bodies, images too seek each other. Even the paintings can desire and embrace. Kiss one another. In this way the mother returns to clothe the son in his own body, throwing herself from the frame of a compromised Pietà, skin-painting filaments that wrap around the withered and maimed body, in an embrace which follows that of gestation, replicating it. The mother again becomes a prenatal cradle: a coffin or shroud. The double-bodied tearing of birth is stitched up into the posthumous grip of two larvae. But what happens if what are re-found are not random ghostly presences, but living bodies, still tumid in their sap?

The landscape then becomes that of a ruinous and supreme love-making concert. Combat where skirmish gives way to surrender. Love is celebrated in its secretions. The reciprocal exchange of bodily fluids. Everything, in any case, is transmitted through seed: life as a disease. Painting too has a liquid body which gives way to the solicitations of intercourse. Sticking, skins communicate: they corrode and encrust one another. What mutates in this process, however, is not only the surface, but the pulp itself of the body of the painting. All transit, in art as in love, marks a point of no return. Contact transfigures/disfigures the bodies of John and Mary Magdalene, penetrated by the disease of their shared love: sacred love. Into the precipice of the image, they have already escaped – into the corner of a canvas – a foot and a leg substantially intact (the Frenhofer foot), where now the only order is established through the casual. It is impossible to say the unsayable without having already renounced the common means of speech. Language abjures itself, as does form. Even the Apocalypse stops. Judgement remains suspended in the orgiastic pace ahead. What we are reading you is something never recounted before. 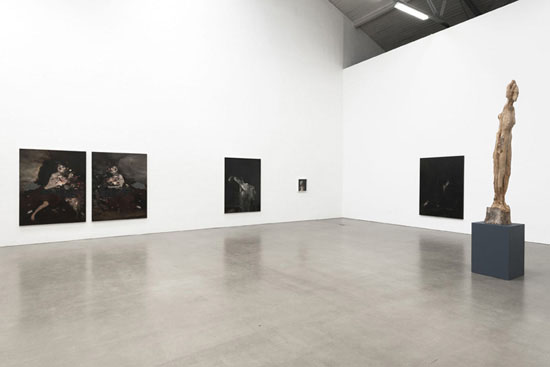 Samorì – massacrer of images – at last leaves to his creatures the honour of finishing the slaughter. Facilely favouring an abusive and uncontrolled germination of bodies (spilled out from some sheer dream or figurative abyss), he encourages the reshuffle, inviting them to kiss. He acts on their libidinal potential, accelerating it to the maximum. PAINTING LIKE MEAT. Like meat, like the sexes, paintings too are called. "I no longer want to be myself!"4 Echo heartbroken by the lover, ready for close combat. Terminal cry of the image, ready to fall, ready to return to: aura – smudge – colour. Breath of the mystic or the crowds, ready to infringe the borders of forms, ready to be thrown back into the embrace which makes us limitless and reinserts us in the dazzling dream of origins.