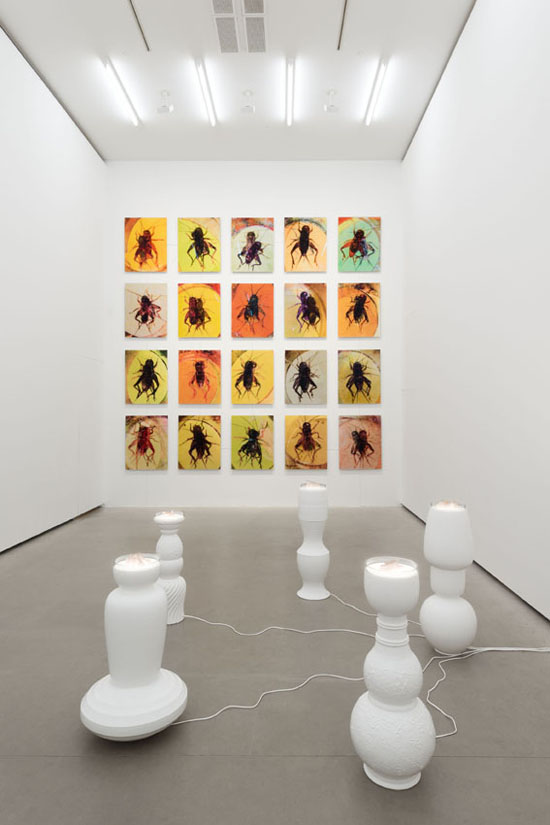 Come, don't be that way, Brother Ant,
Have pity on the cricket!
Is it his fault,
That he sang the summer away?

Before Shanghai became the city it is today, it was filled with the sound of crickets from August to November. In the nested neighborhoods with narrow streets, small buildings, fields, and meadows, they found plenty of food. "The best crickets," Hugh Raffles writes in his wonderful book Insectopedia, "come not from the harshest soils but from the most nourishing: their characteristic physical powers are a result of their early nutrition."1 But over the past 20 years, as skyscrapers sprouted like mushrooms all across Shanghai, the meadows have disappeared, and with them the crickets.

Cricket keeping has been considered a tasteful hobby in China and Japan for centuries. The singing pets were—and still are—kept in small bamboo cages, gourds, or Bakelite or ceramic containers. Specially suited crickets were also set out to fight against one another. Connoisseurs rhapsodize about the five virtues of crickets: their courage and their perseverance, their fidelity, sobriety, and modesty when they lose. Crickets thus symbolize basic moral values that are rich in tradition. For the keepers, the crickets are beloved: they want them to be happy. "Training," according to Hugh Raffles, "is a matter of nutrition, hygiene, medicine, physical therapy, and psychology."2

Cricket fights in China are a national pastime among men, and there is a great deal of money at stake. On the one hand, male crickets compete against one another. On the other hand, it is usually men who raise and care for the crickets with special food, place bets on them, and cheer them on in the audience. While at full moon, the whole family can gather to try to find the right insects in the meadows, and there are women involved in the cricket trade, cricket-fighting is ultimately a sport for men. By way of the crickets, people, or more precisely, men, forge friendships. In the meantime somewhat out of fashion, every year thousands continue to pour into the markets in Shanghai and other cities to sell or buy crickets, and individual crickets can bring in sums of up to 1,500 euros. Since crickets only lead a short life, and are only ready for reproduction or sex and fighting tournaments after seventh molt, the keepers have to buy new ones over and over, or, if they are still available, try to find them in meadows.

At the actual fights, the audience stands or sits around small arenas, small porcelain containers, for example. Each male cricket can only consider a second male in such narrow confines as competition for room and possible mating and will want to drive away the rival. The true character of a fighting cricket is only revealed in competition. To make the crickets even more aggressive, the keepers give the crickets female crickets to mate with before the confrontation—sex stimulates the desire to fight—and stimulate their feelers with sticks, hair-fine brushes, blades of grass or cat whiskers.

In contrast to dogfights, it is the rare exception for cricket fights to end fatally for the loser, who withdraws after losing a fight and, now worthless for addition competition, is first tossed in a plastic bucket and then freed in nature. The winner, in contrast, begins to loudly chirp after the battle. It is the triumph song of the strongest who has driven his rival from the field; his market value rises with each additional victory.

In the thirteenth century, the Chinese minister Jia Sidao wrote the legendary Book of Crickets, perhaps the first book of entomology ever written. Chinese fans of cricket-fighting still refer to the work today. But in Europe as well, the cricket is an animal with a very old link to humanity. The Greek poet Aesop, who probably lived in the sixth century BC, set a monument to the insect with his fable "The Ant and the Cricket," also known as "The Ant and the Grasshopper"; Jean de La Fontaine used it for one of his own fables, but the core of the story is identical. The seemingly light-hearted existence of the cricket, who chirps in the here and now and loves in a unrestrainedly promiscuous way without considering the long term consequences, is attacked for his short sighted laziness and contrasted to the provident, diligent life of the ant, who saves supplies, thus sacrificing the joys of summer life. At the start of the winter, however, not just the advantages of the ant are revealed, but also its hard-heartedness, Schadenfreude, and arrogance. It refuses to help the cricket in the least—it's his own fault for not storing supplies!—and hides behind fixed doors, tight borders.

In his installation, Glückliche Zeiten (Happy Times), using the poem by Turkish writer Muzaffer Tayyip Uslu (1922–1946), Rémy Markowitsch poses the question: is it the cricket's fault that he sang all summer long? It seems complicated, but perhaps the matter is quite simple, for the human being repeats the same story over and over again in many different variations: the one flourishes because the others suffer want, and there's a system to that.

With Chinese cricket-fighting, Rémy Markowitsch takes up a celebration of a mentality that is rich in tradition: they are rituals of national identity formation, as offered by Swiss "Schwinger" wrestlers or Senegalese gris-gris wrestlers. Supported by numerous magical ceremonies (gris-gris), for example, the Senegalese wrestlers, who appear in large stadiums, seek to defeat their enemies and to drive them from the field. There is a great deal of money involved: the prize money in Senegal can run up to 250,000 euros, the winners, like the Swiss wrestlers and the especially strong Chinese fighting crickets, enjoy a cult following. For their victory, the Swiss wrestling kings only receive a bouquet of flowers, presents and a "Muni," a strong bull, but the latter can bring in 40,000 Swiss francs if sold; betting is uncommon. But the Schwinger kings still today represent an ideal of masculinity and belong to folkloristic-national identity formation. For those who have experienced the fights in sawdust on a mountain meadow or the ecstatic mood during a wrestling match at a Dakar stadium knows how difficult it is to resist their archaic force. As in all forms of wrestling around the world, so-called real men come very close to one another, a physical proximity that they otherwise are careful to avoid.

And the male crickets? While human wrestlers volunteer to wrestle, Chinese fighting crickets are forced to participate in the tournaments, something that we might well frown upon. But for many in Eastern China, "happy times" begin when the cricket-fighting season begins every August. Then thousands get onto trains and travel to the fights, bet and lose money, giving all their passion. But all over the world, large movements of people periodically pilgrimage to certain locations like stadiums, markets, fair grounds, or museums to participate in "happy times."

With Rémy Markowitsch, the crickets now come together as in many of his photographic works: by shining a light through the pages of Huo Guang Han's scholarly treatise Selection, Training, and Fighting: 60 Years of Experience with Fighting Crickets3 and photographing what is shown in the light of the overlap of the motifs on the front and rear. The book shows photographs of victorious crickets taken individually in a Petri dish. In Markowitsch's work entitled Wicked Cricket (2016), twenty pairs of crickets overlap, forming a sculptural form in an artful constellation. It is a non-combative anticipation—or reconstruction?—of the fight between crickets. But at the same time, the virile winner cricket chirping can be heard: behind each photograph, audio technology is placed, allowing the sound of chirping crickets to be reproduced. Removing all interfering noises from various Chinese YouTube films of cricket fights, using digital controls pure cricket song becomes a composition of various solos, duets, trios, and choruses, leading to the tutti of all crickets. It is the gripping sound of powerful masculinity, the primeval sound emerging after fresh satisfied desired to mate and attain dominance.

The repetitive, indeed hypnotizing minimal music of the crickets differs however depending on the kind of cricket and in addition is characteristic for each animal and for each intention: defense of territory or courtship, aggression or readiness to retreat are recognizable to the animals. Heard by human ears, the sound led to the English phonetic translation of the sound as "Katy did, Katy didn't," helping the cricket to its name "katydid." The love act as a stimulus to fight, Rémy Markowisch includes the ritual with his wall drawing taken from the Atlas of [the] Chinese Katydid,4 enlarged in huge dimensions, Katy Did (2016).

The view of cricket keepers on their fighting insects is a view from above on an event that can be easily overseen, which is relaxing in a world that has otherwise become too complex. To describe how the human being deals with crickets and what they mean to him, is above all a description of the human being himself. To remind us of this, Rémy Markowitsch places two naked Swiss "Schwinger" wrestlers entangled with one another in a Petri dish. Created using pink soapstone en miniature, they evoke an act of lovemaking or vulnerable newborns that lie there embracing one another. Illuminated, almost glowing, they stand in the spotlight, and we can witness them in a sense from a certain cool distance.

All fighters, cricket fighters as well, hope for a victory. And like all spectators, we too enjoy the cathartic power of a tournament that as a stand-in fight develops a purifying effect on repressed aggressions, conflicts, tensions—and longings for union. At least at the start of a fight, all are prepared for a win, eagerly hoping for victory.

Nadine Olonetzky, born in Zurich in 1962, writes for NZZ am Sonntag about photography, art, and art history, and has written and edited several books. A member of kontrast (www.kontrast.ch), she is also project director/editor at Verlag Scheidegger & Spiess.