From the Verges is Ryan Mosley's first solo exhibition in Leipzig. Verge – in the sense of »side-strip« – can refer both to a small, grassed area, geometrically built yet potentially also full of uncontrolled growth, as well as the edge towards the road. In any case, it is a narrow plot that – slightly elevated – separates several areas from one another and enables a view. From this perspective, we observe these sceneries taking place in the distance, which probably belong to everyday life most of the time. Like a virtuoso, Mosley understands how to transform them into stage plays with a surreal appearance. As he puts it, his starting point in this process is in a way »incomplete, a hinterland between something and nothing«. The artist's point of view unexpectedly merges with the observer's, resulting in a position that leads to an intense interrelation with the protagonist of the image. However, the verge – this magical threshold – is not being crossed. It separates, structures, and creates a sensible distance, carrying the intense observation process without losing orientation in Mosley's very complex, in-between visual world. 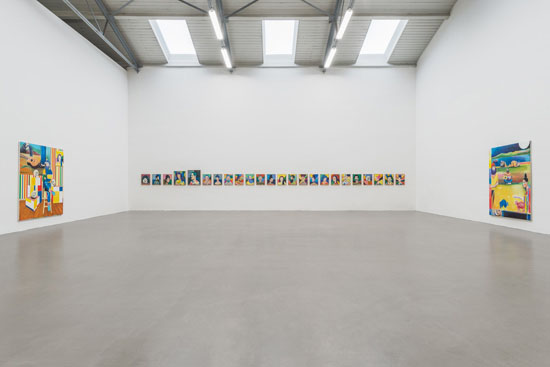 Mosley's observations of the everyday seem to enter his paintings through some sort of filter and eventually evolve into inscrutable and mysterious stage plays. The handling of his visual structure and the colour scheme of the matte – and at the same time translucent image surfaces – is what unifies his works. This effect is accomplished through Mosley's own use of mixing techniques. His materials consist of oil paints and oil bars, with their waxy consistency and colour pigments, which he mixes with linseed oil and turpentine. 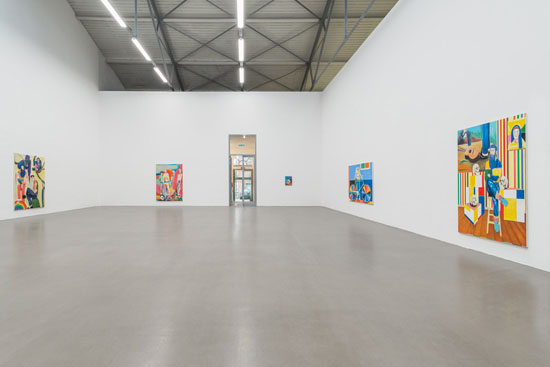 Building from this colour intensity, he developed his 28 portraits, which resemble an ancestral portrait gallery. They are all interpretations of people Mosley has met; some of whom he discovered during his wanderings, while others stem from his imagery and imaginary worlds and reappear in his large-format paintings and vice versa. Handling colour like a virtuoso, he develops a variety of geometrically constructed backgrounds of multiple shapes with bold colour statements, with a tendency to merge the characters' faces with them, the faces being mostly depicted with restrained expression, in turned, frontal, or side view. What results is an amalgamation of painting and drawing. Mosley reports that he recently started fully drawing the portraits. This creates formations of heads surrounded by mandorlas and halos, and results in the diversely patterned clothing – reminiscent of costume tops – corresponding with the background. It almost seems as if the emotions of the portrayed manifest in the dynamic colour patterns in the background rather than in their faces. Once we look long enough at these paintings – which are so dense in their content and colours – and intensively take in the colours and shapes, we could consider these works, tying in with Wassily Kandinsky's theory of the sound of colours, wonderfully musical compositions. 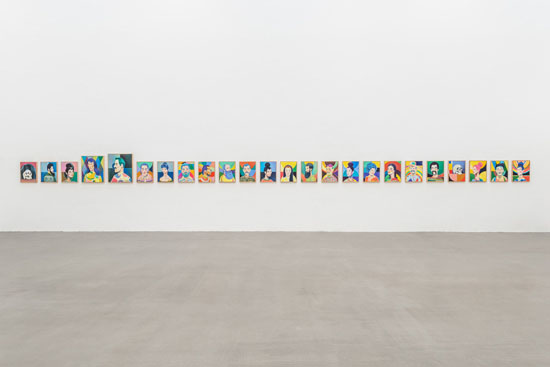 Extracts taken from the text Liminal Worlds by Jutta Mattern, published in the catalogue: Ryan Mosley: From the Verges, Leipzig 2017.