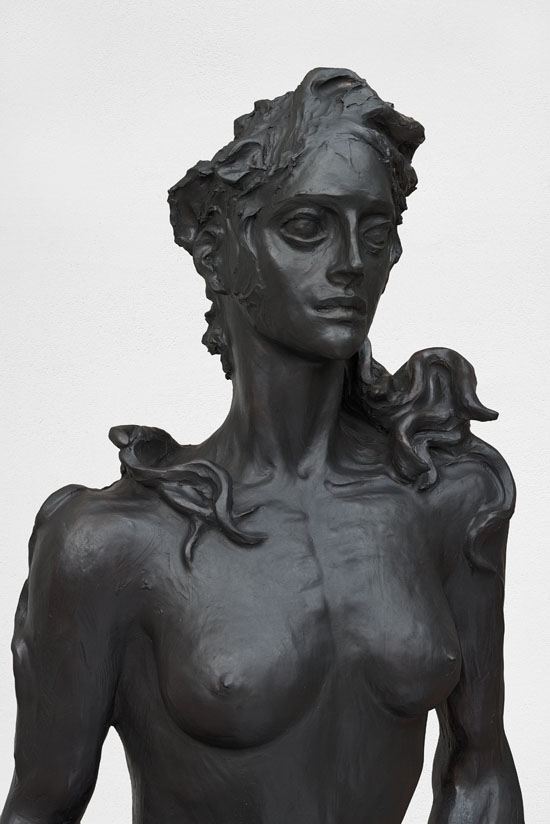 Where in her last group of works, ghost light, (the friend, the stranger, the girl), an inner Whiteout defines the space, now it is an almost diametrically opposite, crass pictoriality that asserts itself autonomously and that makes the space, as a world, disappear in the Whiteout.

Stella Hamberg is a sculptor. Her artistic stance and language develop out of pictorial contradictions and pictorial and conceptual antagonisms.

Her figures, whose result seems disturbingly self-evident, are based on programs of conceptual and artistic combinatorics: networks of allusions, quotations, contradictions, and abstruse or even grotesque ruptures. Style-quoting aspects and their dissolution. Elaborated anatomy, realistic to idealized, exaggerated or distorted proportion and posture: these include both spontaneous and adopted, both sensual and reflected and deconstructed concepts of form that fuse in a complex artistic system and a figurative self-evidence.

The current exhibition displays two black-patinated, figuratively worked bronze sculptures from 2013 whose brief titles “Dog” and “Woman” stand in stark contrast to their vehement physicality, chromatic and material presence, and background of thematic development. This contrast between reduction and opulence is carried further. A first quick look at the black works in the white gallery room ineluctably suggests calligraphy. The figures stand like signs in the room.

A closer look reveals rawness, furrows, textural multiplicity, and the intensity of the processing of the surface, and material: contour and texture supplement each other in a non-leveling contradiction. The demanding or even overtaxing methodical eclecticism of Hamberg’s sculptures finds its synthesis in the figures whose stance seems unmediated at first glance, as well as in sign-like and shadow-insensitive black.

After the “Berserkers” of 2007, once again mythological contents are part of the processual field within which the sculptures develop. And once again, history and stories remain in the universe of the developmental background, one of the providers of information.

Hamberg develops systems of reference and subjects their concepts to a whiteout, a detached view and processing that remain and must remain unlocated. Her sculptures are to be understood generally as the process’ core, which radicalizes as it is worked out. Constructive and deconstructive components combine in Stella Hamberg’s works as a questioning of the sculptural language and the concepts it deals with, and thereby to images that are disturbingly autonomous and timeless or outside of time.

The “Dog” doesn’t stand still. It has no fixed form, no fixed position, and here it seems to differ from the usual depictions of Cerberus, in which the head’s form in tripled, by showing a figure with a multiplicity of completely different characters.

Completely different individual images – snapshots of different movements and figures – arise, depending on the angle of view and the intended attribution of the anatomical lines and limbs. Interlockings, “double exposures”, and metaphoric transitions reminiscent of still shots from films create a polyrhythm that is exaggeratedly heightened in the various modes of elaboration, which markedly differentiate the surface of the figures and which do not come to a standstill even in a static viewing.

The “Woman” is an erectly squatting, greater than life-sized figure with snakelike hair. Dimensions reminiscent of propagandistic rhetoric combine with spontaneous, sensual, authentic linguisticality. At first glance, what dominates is integrity, a figurative composure; at second glance, insecurity and vulnerability dominate. Furnished with various epochs’ conceptions of beauty, she appears monstrous and masked and yet remains intimate and personal, her individuality resisting every generalization or definite categorization.

When one views “Woman”, something in the interplay of stance, anatomy, proportion, facial expression, and surface triggers a restless chain of associative pairs of conceptual poles. Nearness and distance, vulnerability and brutality, the private and the public, subject and object, integrity and dissolution, etc. – from whatever side one approaches her, she remains an extremely ungraspable, ambivalent figure.

“This place, where what fascinates disappears, which is more fascinating or stranger: it is the disappearance itself that carries itself out and asserts itself, that grows, until it enchants and volatilizes those it enchants.”

(From George Bataille: Executioners and Victims)

“The term Whiteout describes a meteorological phenomenon that appears primarily in polar regions and high mountains. It refers to the brightness that can be observed when the ground is covered with snow and the sunlight is muted (by clouds, fog, or snowfall). The greatly diffused reflection of the sunlight and the accompanying extremely minimal illumination greatly reduces contrast, so that the entire field of vision seems to be equally bright. As a result, the horizon disappears; the ground and the sky blend seamlessly. Contours and shadows are no longer recognizable, either, and the viewer has the feeling of being in a completely empty, endlessly extended space.”