What Peter Handke introduced in 1966 in his stage play “Offending the Audience” applied equally for the space behind the stage: the backstage area. Here, too, there is no game. There is no alienation effect, no acting-as-if, no public realm. In the backstage area, the roles are abandoned. This area is more honest, more authentic, maybe somewhat dirtier and at the same time more exclusive. For her exhibition, Stef Heidhues chose the title Backstage with the Modern Dancers. Applied to Heidhues’ works, “Backstage” also means that nothing is pretended. Her minimalistic approach makes it possible from the beginning to negate media deceptions and the promises of the pictorial world. The steel pipe is no fable animal; the rubber and the fluorescent tubes don’t disguise themselves. 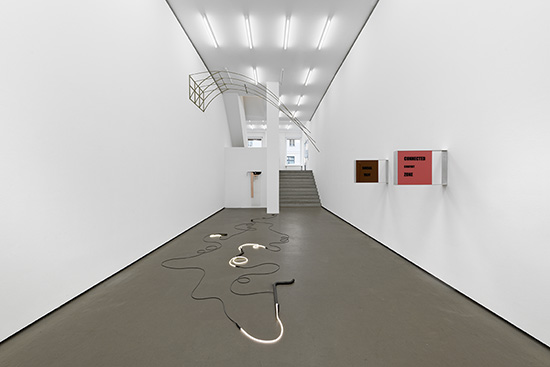 Let’s look first at the floor. The installation Braces casts cables in loops and lets the thick, black line of the tube break where it kinks, in order to illuminate the next curve with new verve. What is concrete here, along with the material, is a line that runs through various thicknesses, impulses, and directions, like a drawing. Lithe, light. Massive, rigid. Cold, angular. Blurred, glowing. Schizophrenic and elegant at the same time. The bulges and breaks must be traversed on foot. This floor drawing is also a reference to the dancers, who are not present. Markings on their stage floors can help them dance pinpointed positions and choreographies. Heidhues’ installation seems like a translation of such markings into an abstract model of a landscape. In the public performance space, such marks are not visible to the audience, but the viewer can experience this transformation in Stef Heidhues’ private backstage area.

What is still in a light, moving flow Below hardens Above in its graphic end position. The artwork Awning grasps like fingers or claws past the viewer through the room. It consists of fragments of a roof, a canopy, or an awning that would normally cast pleasant shadow. But not here. The work gives the viewer no relief. Awning defines the dimension of a room, as a basic architectonic framework and as organic extremities grown long that remain unreachable even with one’s arms outstretched. Tension arises, and one cannot shed the evolutionary reflex to keep one’s eyes on these vibrations in the air.

In another place, the hard materiality of the neon lamps is broken up by black rubber, which, in its spread-out form, could also substitute for a painting on canvas. Close up, one recognizes the signs of wear, a surface that has already lived. Illuminated, it appears almost gesturally painted out. But black rubber also implies eroticism, fetishes, and costumes; on the other hand, the dark rubber mat is reminiscent of bodybuilding areas, loading zones, and security floors in workplaces. Its robustness means the material can withstand a lot without backing down. In Heidhues’ artworks, the surface effortlessly radiates a dominant (stage) presence, its charismatic existence quietly powerful. In this way, an unexpected tranquility arises in Exit for Renegades, a peculiar peacefulness with clear relations. 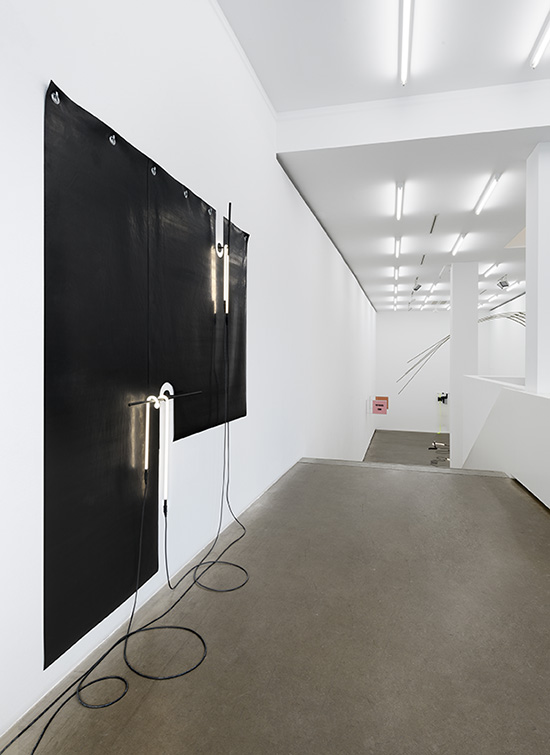 The aesthetic in Stef Heidhues’ works reveals a directness in the hardness and clarity and in the resilient plastic inherent in the black-and-white nakedness of their appearances. Similar aesthetic dispositives of concretized reduction were used in Dorothea Rockburne’s abstract painting and in the radicalness of Hubert Kiecol’s scaffoldings.

“The dimension of possibility is part of the work,” wrote Stef Heidhues about the works of her professor Franz Erhard Walther, with whom she studied at the Hochschule für Bildende Künste in Hamburg from 1999 to 2005. Here, too, the issue was the idea of the uncompleted work of art, of the empty spaces and the ruptures that appear when a narrative emerges too clearly. When the artist today brings the backstage area into play as an (imaginary or even real) starting point or venue for works, then this site, too, must be examined for the dimensions of possibilities. If what happens on stage really multiplies the potency of the ideas, they are ultimately still captured in the purpose of their game and in their narrative character. Heidhues peels off the costumes and the narrative ambiguity; what remains are fragments, scaffoldings, contrasts, and constellations. The possibilities behind the story lie precisely here.

The colors of the make-up are flesh tones, rouge variants, or lipstick shades that accentuate the room. The works NoSign#3 and NoSign#4 can thus be read from the skin. The “Physical Con” of the rosy complexion becomes on the darker skin “Physical Social” and “Con Tact”. In the rouge of the cheeks, the lips’ “Tance Dis” is suddenly a “Dis Connected” or a “Dis Tance Zone”. But there is no unambiguous way of reading here, either. The dancers, after all, are not here to be asked. That’s what defines the backstage area – the dissolution of the planned narrations.