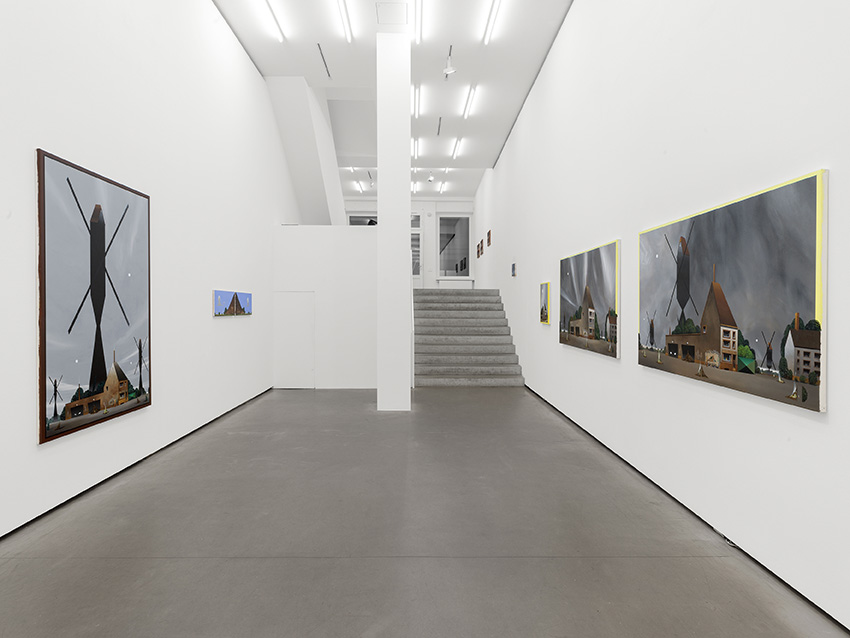 The protagonists in Titus Schade’s disconcerting and refreshingly bewildering paintings are architectures that seem like stage sets presented like props on shelves resembling typesetting cases, on tables, or in deserted, bleak landscapes and as motifs on Delft tiles.
His paintings evoke spontaneous associations with Giorgio de Chirico’s cityscapes with their stylized architectures and starkly contrasting shadows. Whereas de Chirico’s predilection was for depicting towers, arcades, and fragments of classical construction, Schade works with familiar domestic types of buildings and half-timbered constructions. Among his favored building typologies are storage and industrial architectures with cranes, overhanging storeys, and long factory smokestacks, but also stylized mills and castle complexes with overstretched tower steeples on implausibly high, steep cliffs. Half-timbered townhouse facades, with few or no windows and reformed in the postwar era or contrasted with annexes, are also among Schade’s recurrent repertoire. These types of architectures are supplemented with prefab slab-constructed facades, firewalls, single-family homes, and duplex halves, which latter can also be freestanding without their counterparts or depicted as “schizo houses” with two different half-faces. They, too, are shown with few if any windows and generally without doors – at most with garages.
What seems least disturbing are the stage-like, sterile, and hard-edged buildings, which are often depicted in a rigorously frontal view and recall computer graphics when they are placed as models on shelves reminiscent of typesetting cases. In this context, they can enter into proximities and relationships with other buildings, decorative trees, or objects like candles, paintings, or fruit bowls. But these architectonic protagonists are disconcerting when they are placed in deserted, sterile landscapes under the light of the full moon. The constructions often appear to float freely in space without any real connection with the ground. They are equipped with the frequently recurrent motifs of burning campfires, bushes and woodpiles sharply halved, or an axe in a chopping block that looks like a person had just interrupted his labor and would reappear any moment to continue it. Schade’s model architectures show no sign of life or organic material, with the exception of some candle-shaped, smoking chimneys. They contrast with hyper-realistic, often seemingly threatening cloud formations or treetops that seem so real that one almost hears their leaves rustling in the wind.
However unreal, stage-like, and lifeless the painted architectures and their settings may be, they take on additional intensity by being more powerfully anchored in our current architectural culture than a first glance might suggest. Schade does not depict real buildings – but countless relatives with similar characteristics can be found in the industrial parks and peripheral areas of our cities. His single-family houses and duplexes, which reflect themselves in their wall decorations or in the shapes of birdhouses, are not far removed from the reality of many present-day tracts. Their new constructions are often based on modular components that enable builders to use the building block principle to design the same type of house in a Tuscan, Mediterranean, Art Deco, or Classical Modern style. To upgrade existing buildings, the do-it-yourself stores offer an inexhaustible repertoire of recurrent, ubiquitous decorative elements. With their fully sealed or graveled front yard deserts that recall lunar landscapes, where pruned and topiaried boxwoods are often the sole surviving plants, many tracts of single-family homes radiate hardly any more life than the architectonic scenes in Titus Schade’s paintings, which hence sometimes appear more real than reality. 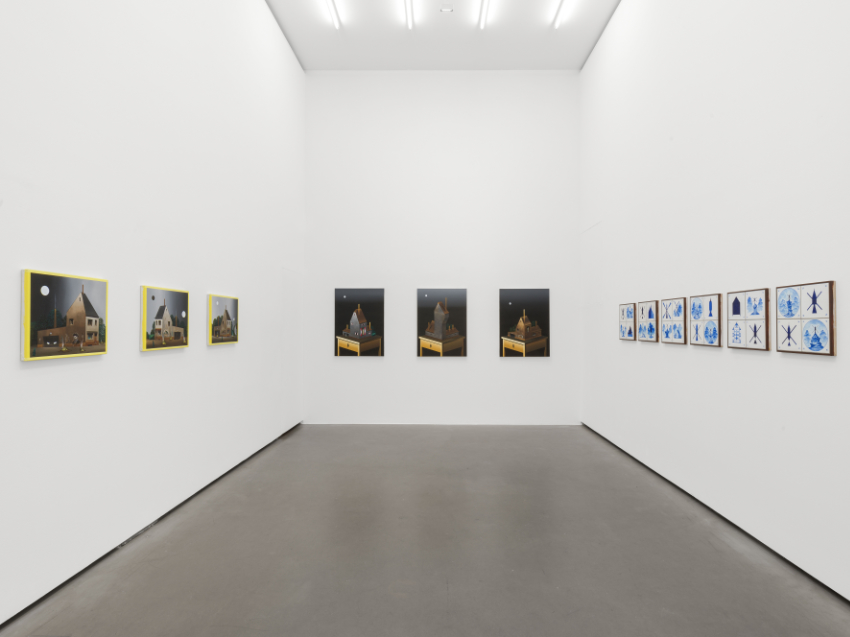