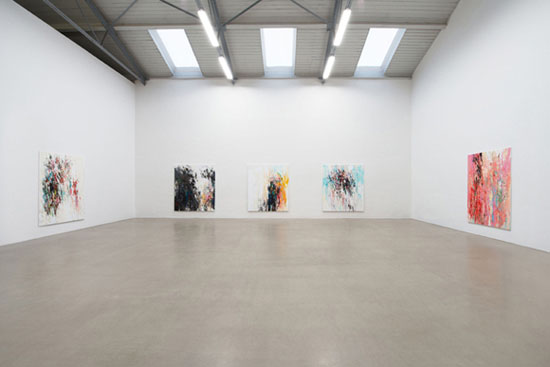 WAS WAR DA LOS? – What was happening there? DA, there, refers to the 12 exhibited canvases and LOS, happening, to artist Uwe Kowski's studio in Berlin. Unrecognizable painting, i.e., abstract. THERE, except for a few figurative echoes in the form of rudimentary traces of heads, is nothing to be stylistically interpreted. In their pictorial effect, all the painted canvases are reminiscent of genre battle scenes; they developed as Kowski cut loose and fought the melee over the genesis of the picture. And in this context, there is probably nothing more challenging than to produce an explanatory text equivalent about Kowski's painting.

The painting process has left its marks on his works as if on a military map, articulated as richly colorful detonations. With breathtaking frequency, the brushstrokes are set densely beside and over each other. No static positional warfare, because the stereotypical repetitions of form that the painter's hand might instinctively want to execute from a feeling of security in craftsmanship are suppressed and rare. Rather, there is a constant shifting of the front between artist and brush, leading the color cells to tear apart, swallow each other, or even spit each other out. The brush conquers the primed canvas territory successively with flank advances and, sometimes, rear guard actions. This campaign of conquest isn't completed in a single day. The painter's hand and the artist's head make ceasefire agreements, so that the painter can step back from the canvas and observe the overall composition with an artist's eye. The work is sometimes placed in a remote corner of the studio and brought forward again on subsequent days. Finally, the last decisive battles over color and form are fought, until at some point the canvas capitulates to Kowski and the peace negotiations can be concluded with the artist's signature. So much for WAS WAR DA LOS? 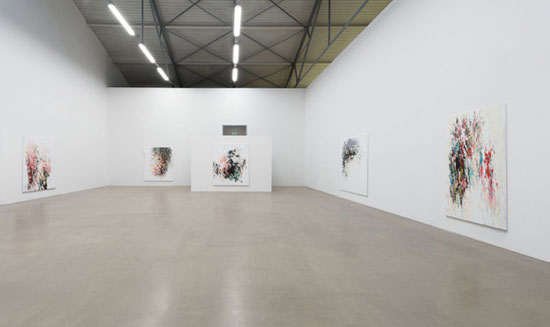 The pictorial results that Kowski commands more than respect from the blue-helmet art historian inspecting the colors and forms. Not least because, in the presence of these paintings, masses of marginal glosses on the artist's biography or marginal discourses about art-historical categorization seem unimportant. Of course the familiar sentences about background and role models could be added: that Kowski was a student with Bernhard Heisig at the Academy of Fine Arts in Leipzig and trained in the almost extinct profession of sign writer and calligrapher, that Kowski pursues painterly and graphic pictorial strategies at the same time, that... etc. But would all of this sharpen the sensory impression the paintings make?

Let's try to develop another approach to this phase of development in Kowski's artistic work, presented in January 2017. At the beginning, unquestionably, stand the artistic will and the pleasure in painting pictures. The first brushstroke, motivated by a visual idea, is placed, thereby triggering a complex domino effect. For on the canvas, something visible appears that makes an aesthetic impression on the artist's eye and reshapes the original visual idea retroactively. In other words, the painter's hand is guided by the painting that is in process and at the same time perceived. But that's not all; this dialectical interactive process is accompanied by visual experiences of the present that take place outside of the canvas, as well as of the past left associatively in memory traces on the retina. All this happens simultaneously, so that the act of painting, if not hazardous to health, is still the equivalent of a constant visual burden on the sense of sight. 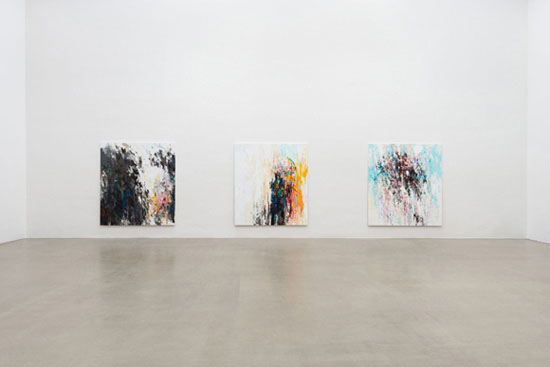 Kowski skillfully impedes an imitation of reality on the canvas that would serve our habits of seeing. His procedure could be better described as destruction or – expressed more moderately – painting that succeeds in pushing back perception. The construction plan of the picture is thereby exposed and, as a kind of parallel image, juxtaposed with the sensory impression. This autopsy performed on the picture is ultimately part of why the viewer finds hardly any access points for his legitimate desire for a figurative view. Kowski's painting is so condensed that, thanks to the accompanying autonomous claim to power, it lets every associative outside projection fizzle out when it strikes the canvas, mostly without visual echo. Instead, what emerges when one responds to the masses of color running riot, when one at last brings them under control with one's eye, is an inkling of a pictorial grammar that the artist himself has developed over years. But it does not serve him as the foundation of a pictorial narrative. On the contrary, Kowski goes below the legible level of the picture and presents a structural code for colors and forms that puts us in the role of the layman. We can only look on in unbelieving astonishment when what arises on the canvases is like a program whose execution could generate conventional pictures on the user interface.

IS SOMETHING GOING ASKEW? With this pictorial program, except for the motion of the brush in some passages on the canvas, nothing goes askew.