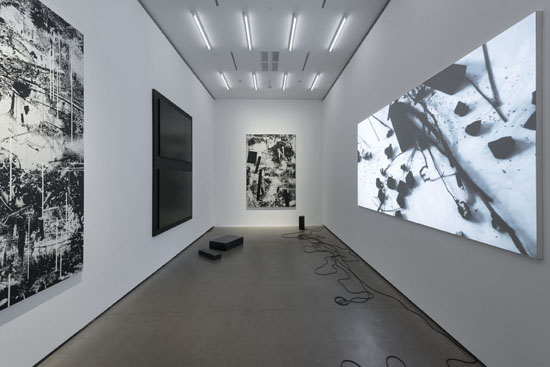 Yehudit Sasportas' current exhibition Vertical Swamp – Raw Material reveals new artworks she developed since her solo-show Seven Winters (2013) at the Israel Museum in Jerusalem. In addition to three large-scale ink drawings there is a new video piece and also an installation which are part of the exhibition.

For a long time Yehudit Sasportas' special interest is to find her very own seismographic code-language to visualize sounds in order to depict an objectification and concurrently an anonymisation of personal 'life-expressions' in her artistic work. Therefore, for instance, she transcribed the sounds in her family home which she had recorded over a couple of years into the esthetic code she developed herself. The initially very narrative information of the recordings were decoded, anonymised and transferred into seismographic diagrams artworks via drawing or installing. 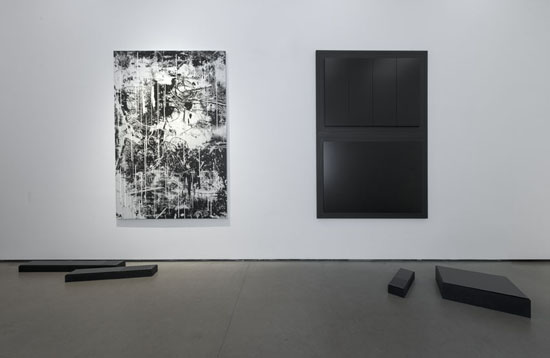 The present exhibition shows the latest developmental step of this code language: the lines and source information of the sounds have turned from the two-dimensional drawing form into a more-dimensional one through almost sculptural cuttings and physical 'burnings' into the pieces themselves.

Yehudit Sasportas compares this process of cutting and burning with the idea that a major event of the mental life is just as burned into a person's consciousness and has the effect of a subjective filter through which the individual subconsciously experiences the objective reality. Therefore the artist describes her works also as 'mental' landscapes revealing a further aspect of Yehudith Sasportas' artistic oeuvre.

It visualizes her intensive occupation with the constant motion and interaction taking place between the various spheres and dimension, between the physical and the metaphysical, the subjective and the objective, the consciousness and subconsciousness. 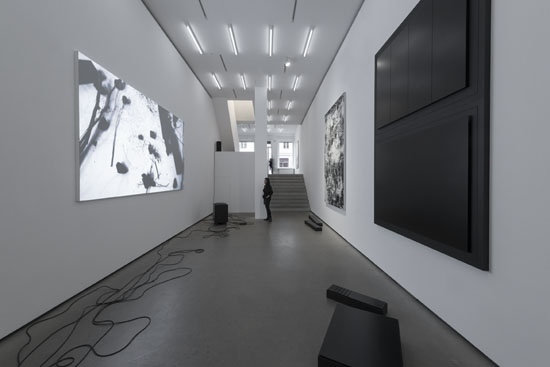 In the video piece The Magnetic Shaky Table presented in the exhibition Sasportas' philosophically orientated interest is aimed at an existing peat bog in the Northwest of Germany. A lot of the various materials for the conceptional still life have been brought into her studio from this particular moor area. They were then dried and arranged for this art work - kept in constant motion for years through magnets.

Within The Magnetic Shaky Table (length 27 min.) there is the simple scene of a still-life depicting the collective subconsciousness which is in constant motion: magnetic rocks, dried pieces of a tree from the moor which have inserted magnets as well as branches and ropes made of felt which have been made electrical by wrapping them with very fine cables and which are functioning as drawn lines. Via the active magnetic field the model was moved for a couple of years and was only stopped from time to time by the artist herself. Yehudith Sasportas took photographs of these movements from the ceiling of her studio and developed the video piece out of these photos. The musical soundtrack is by Gamliel Sasportas the bother of the artist which shows the subjectively-personal reference.

For the artist the peat bog embodies a symbol for the transition, the gateway into another (metaphysical) dimension which she repeatedly takes up in other art works too. Just as the motion of spaces – the physical and the metaphysical – covered also in her previous videos and artworks such as The Moon (2003), GHARDI – local voices (2009), The Light Workers (2010) and Vortex of Separation (2011).

The exhibition shows apart from the drawings and video work an installation – the device that Yehudit Sasportas used in her studio to keep the 'Table' in balance uncovering even here the action between the two poles of the naturalistic and the technoid.

For the artist her works are to be understood as allegories for existential situations. With them she creates an energy field out of the contrasts of movement and pause; tension and discharge; and last but not least out of the individual experience of the viewer and the objective perception of the piece of art itself.

In very different ways Yehudit Sasportas succeeds to build up, trap and release the tension between the inside and outside as well as between two-dimensionality and three-dimensionality.