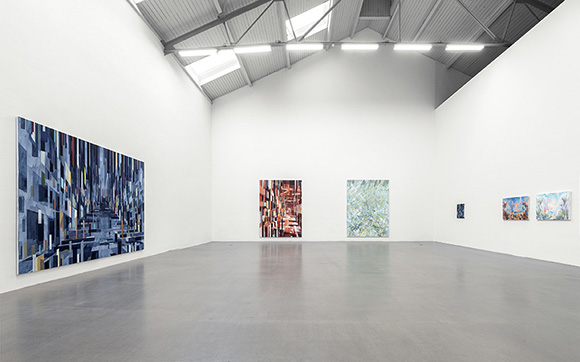 This kind of audio system allows smaller motifs, fragments of musical ideas, to unfold into luminous protagonists of a piece, just as in the pictorial space created by David.

Pursuing this analogy further, terms like key, structure, dynamics, and tempo come to mind. In Davis Schnell’s paintings, a basic tone is established initially, which sometimes appears permeable and watery, sometimes darker und deeper, and with its color and surface determines the painting’s atmosphere. The as yet open, free space is then divided and structured by one or several vanishing points and numerous vertical lines.

Just as with music, there is apparently from the beginning an idea about the mood and the scale of the piece, and now composition, a play with abstract and figurative visual elements, can take place. 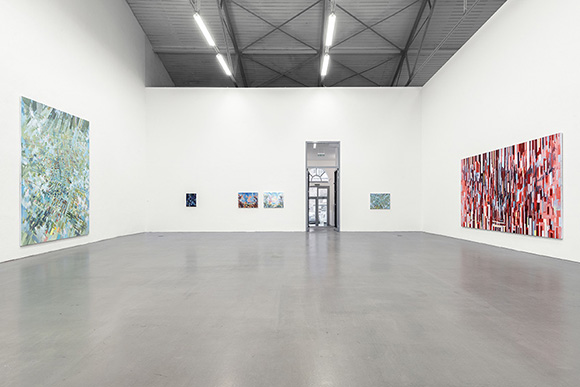 The new works by David Schnell exhibited here are small to very large paintings showing the earth from above, sacred spaces, or landscapes. Faced with the painting where one imagines seeing the earth from above, one is so far removed from reality (for example an agricultural farm), that standing in front of the painting one thinks above all about how gentle and calm everything looks if one is only far away from it. Only a few generously and loosely painted clouds interrupt the street courses one tries to trace, or the infrastructure one attempts to identify.

Another series of paintings presents very high rooms where uncounted small, colorful shiny small plates or panels are lowered from above into the painting. They are reminiscent of the curtains that are popular in southern Europe. Those that can be found in the entrances to stone houses, separating the sunny heat of the street from the shadowy interior of the houses. They are light and colorful, sometimes made of wooden beads or long, colorful straps of plastic.

We see landscapes where few trees are placed, often symmetrically, that reach like energy fields into the bluish-orange sky.

The way in which the oil painting of these works appears is similar to pieces of new music, where the instruments move within the set of rules determined by the composer.

A free endeavor which is at the same time based on a strictly designed construction. It is both abstract and figurative, it seems technical and yet has a lot to do with the perception of nature.

All the paintings by David Schnell make a fascination for very large spaces visible.

They make us want to move in this space, grasp it, reinvent it and represent it like a world where there is a very great deal to see.

And precisely this concern makes the paintings by David Schnell similar to looking into the stars or listening to music on a really good S T E R E O system. 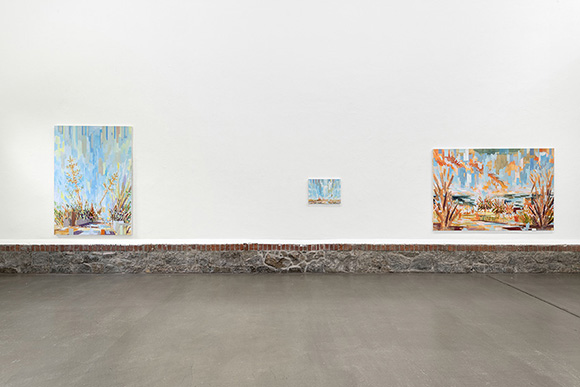