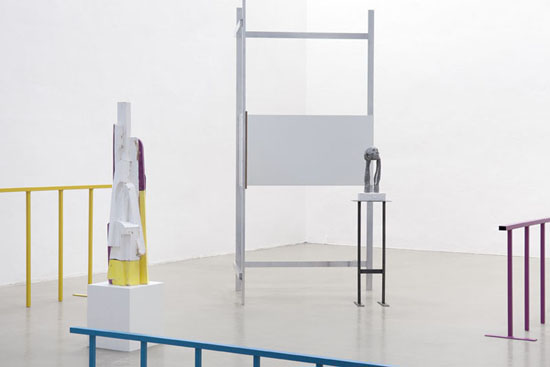 Truly, Kai Schiemenz cannot be accused of indissoluble loyalty to genre and material. With him, everything is subject to a free volatility, from wood through steel to mixed materials, implemented and realized in installations, large constructions, and objects. Whereas he built whole stage sets, theaters, and arenas out of wood or tossed out steel beams as pick-up sticks of light, most recently he has been busy with glass, this undercooled glossiness and its magical ability not only to let brightness and light through, but also to store light auratically: volumetric compositions, exposed to the alchemical play of a hardly calculable coloration of this archaic material. This testified to a beauty of objects, which was long scorned as a concept and goal.

In Leipzig, Schiemenz shifts to yet other materials and other forms of presentation, to artificial marble bound in Acrystal resin and poured into cardboard; remnants remain attached, torpedoing the smooth wholeness. These compositions are not strictly geometrical, but free abstractions of the volumes. But added to this is a series – no, a whole collection – of more sculptures that pose riddles. Here a hand, there a head, in the back an arm fragment. What is this, what drives these searching movements in material and arrangement? Astonishingly enough, the Leipzig assembly displays a turn toward representational, figurative depiction. Suddenly arms grow on a constructivist sculpture. The logical construction of the directions and forces is reformulated into a sensual body. Here, a narrative aspect enters the design that, from a distance and approximately, says: Thou shalt make unto you an image again, return from the emptiness of abstraction to fleshly-pictorial fullness. Is this the case? 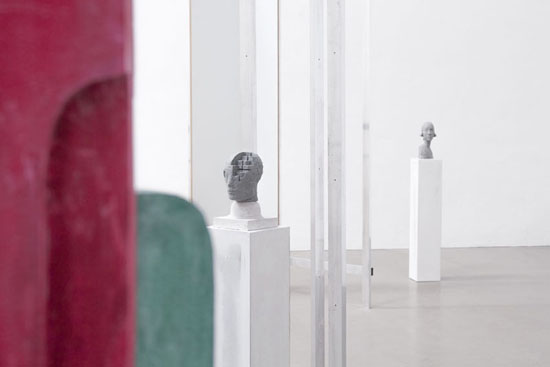 In a conversation, Schiemenz and I found ourselves in a dispute over two German terms – and at our limits. I asked him what he calls his objects, Skulptur or Plastik. Skulpturwas his prompt answer, before a quiet hesitation began; Plastikwas too Western, in his view. All of a sudden, Germany's division echoed and fulminated through the art space, the bad sign of 20th-century German history, because my feeling for language, too, wanted to place Skulpturand Plastikto the east and west of the Wall, respectively. Neither of us found the precise thought. Because already around 1900 – that is, long before the later political confusion – the encyclopedias wrote that "the terms Plastik,Skulptur, and Bildhauereiare usually used synonymously". Hardly any specialists still adhere to the distinction that a Plastikinvolves adding material (for example, clay), while a Skulpturarises through the elimination of material (chiseling, blows, hollowing). Decisive is that both are forms of Bildhauerei– and this term should be carefully considered, as well, because it is seldom used anymore. Hauen– to hit or hammer; Bild – a picture. Physically active chiseling, thinning, squeezing, hitting, always to bring a picture into the world. Apparently, Kai Schiemenz is on his way to this, on the threshold from abstraction to concretion, from the informal to the corporeal.

But after the century of abstraction, this doesn't seem to develop without fright and violence. In the room stands a small sculpture titled "Rumpelstiltskin". It is a harmonious, dancer-like figure with beautiful proportions. The overlong arms rise from short, stamping legs, in order to – well, what? To tear in two the head, which has already cloven appallingly. Rumpelstiltskin is a Lar, one of the unobtrusive gods whose task is to protect the threshold and who is to be respected, tended, and listened to. He is the magician of transitions, until he himself is unmasked, exposed, and cleared up by name in the literal sense. 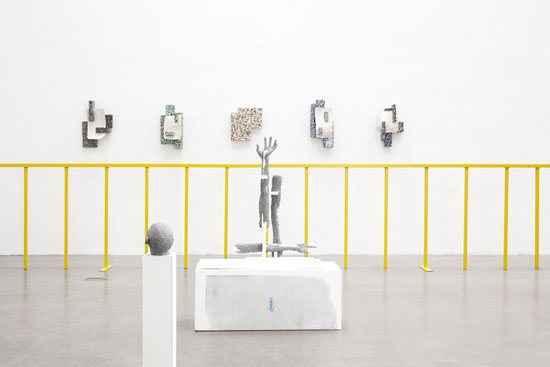 But precisely this sculpture is made of plasticine, an impermanent material; Kai Schiemenz takes his threshold lore to the point that he lets its gods disappear again immediately. Is this the enigma of the exhibition's mysterious title, which, obstreperous and banal at the same time, refers to flipping a fried egg and letting it turn and twist? Picture and representationalism – turned once more and fried again from the other, the abstract side? Who can know?