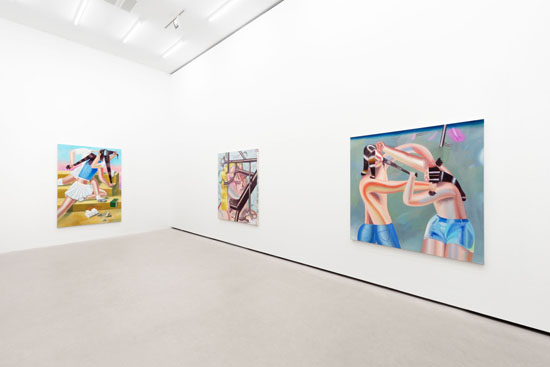 In Kristina Schuldt’s pictures, faceless, two-dimensional, tubular women’s bodies lie, fall, languorously loll, and bend. They resemble smoothly polished machines more than living beings. The legs with their small feet in smart shoes flow smoothly into stretched and curving backs, with the fat, too-long arms bent over forward to the ground to support them.

Kristina Schuldt unashamedly makes use of the pictorial forms of Classic Modernism, but she creates her own new pictorial language, for example from the wavy hair of a Fernand Léger painting or the ornamented, broad-surfaced interiors of an Henri Matisse and powerful, schematized bodies that recall the avant-garde pictures of the 1920s. She exposes her figures to a garish party illumination and uses cigarettes and miniskirts to give them a nonchalance and coolness that is more reminiscent of teenagers than of the mature, strong women that the bodies present.

Even if the women in her pictures lie around as if “bored out” in bizarrely twisted or lethargic poses, they seem to be captured in constant motion; they have to hold on tight in a greatly extended moment of falling, because gravity no longer functions. This falling also describes the artist’s work method: at first she loads the canvas with forms and colors, piling them up on each other and filling the pictorial space until nothing more fits. Then comes the falling, which sometimes takes several weeks, a floundering feeling until the ideas materialize and the things she initially placed, like parts of plants or bodies, disturb the newly emerged order and are rejected or have to be viewed anew.

Among the twining bodies, one element arises again and again: a plant shooting upward until it collides with an obstacle or simply snaps over for lack of energy. This lack of energy seems to transfer itself to the bodies that, completely abandoned to the vanishing of their power, collapse on the floor or have to lean on supports to avoid falling from the smooth picture surface or plunging out of the picture frame, as in Schuldt’s most recent works. 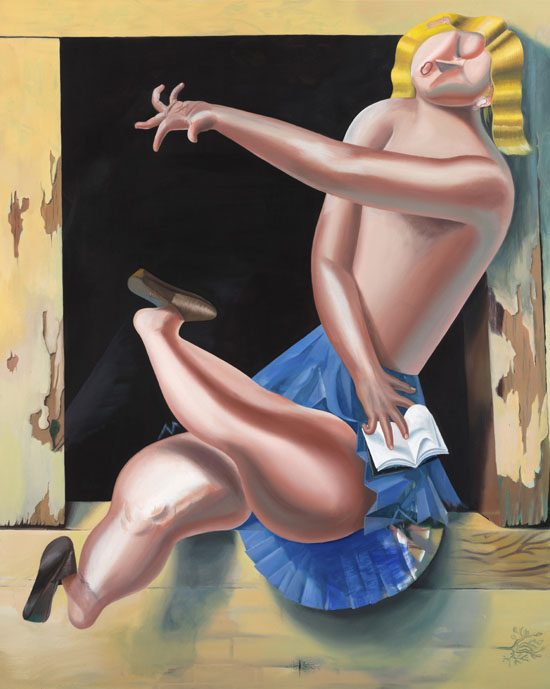 The figures and their extremities in her earlier pictures were languorously subjugated by their situation; in the new works in the exhibition, an increasing consciousness of morals comes into play and is reflected in the bodies.

Beginning from a long delving into the Flemish genre paintings of Jan Steens, the portrait with its facets moves into the foreground. With an almost sculptural gesture, individual parts of the face are shaped, cubistically interlocked with each other, and corrosively subverted to the point of unrecognizability. Kristina Schuldt thereby remains loyal to her tubular forms, which for her are energy channels that, viewed long enough, twist as if in a distorting mirror and whose composition aims to appear like a sign or sound.

Kristina Schuldt (born in 1982 in Moscow, grown up in Neubrandenburg) studied at the Hochschule für Grafik und Buchkunst (Academy of Visual Arts) in Leipzig with Professor Sighard Gille and Annette Schröter and was a master student of Neo Rauch’s from 2010 to 2012. She lives and works in Leipzig.