> here you get directly to the exhibition

The Figures Are Listening In
Ralph Keuning

Neo Rauch, the Leipzig-born artist who studied at the Academy of Fine Arts Leipzig (HGB) with Arno Rink, has left a mark on art. With his figurative paintings, the international art world was his oyster in the 1990s. Yet at the time his paintings were situated decisively outside of the canon of contemporary art.
His preference for comic strips, the impalpable quality of his narrative threads—talk was of ›the riddle Neo Rauch.‹ The fact is: Neo Rauch is a prominent pioneer of the grand return of the figurative to visual art. With him, and through him, Leipzig has achieved an international reputation as the city of painters.
It seems to be a curse of figurative representation, which likewise affects Neo Rauch: his paintings are extremely well suited for a socially oriented interpretation. On the occasion of his 2018 exhibition at the Museum de Fundatie in Zwolle, I fantasized over and wrote about his painting ››Gewitterfront‹‹ (storm front, 2016) as symbolizing Europe between collapsing and rising up, between succeeding and failing.
Neo Rauch calmly but resolutely invalidates this kind of ›reading into‹ as something that only takes place in the viewer's mind. His art in not political, ever. The intrusive associations are entirely those of the viewers. They are not the artist's brainchild. The heart of Neo Rauch's art exists in his own world, in his dreams and visions...
The paintings are like creatures that the painter brings to life, with their own heartbeat and a need for their own biotope. When they leave the safe realm of the artist's studio, a place should be found for them—the home of a collector or a museum—where they can thrive, where they play the role of a companion for those who live with them under one roof. They should be handled with care. 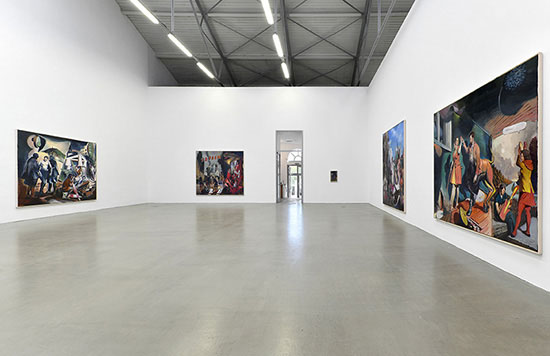 This necessity is sometimes underestimated. That may have something to do with the fascination for the eighteenth and nineteenth century that shows through in Rauch's oeuvre: that sense of a time traveler who has found his favorite place in the history of humankind and who now projects his mind precisely on that realm. The hard work on his field as well as on the fields of his father and ancestors gives birth to a filigree construct out of paintings that appeals to the viewer's sensitivity and openness. For only then can he or she become connected with it: prejudices, ›framing,‹ to once more use this buzzword, are inappropriate and even altogether unproductive for the viewer. Rest assured: even without us having looked at them a single time, paintings by Neo Rauch are capable of braving eternity, and they will outlive all of us. Approaching these paintings in precisely this way may perhaps allow us to partake in a fraction of this eternity.
The significance that eternity has for those of us who appreciate art can perhaps best be understood by means of Netherlandish painting of the seventeenth century. The rich merchants were the major clients of an incredibly gifted generation of painters that took up painting masterly portraits of them. In those ingenuously optimistic days, they were allowed to be vain, testosteronefilled paintings. For example, take a look at ››The Night Watch‹‹ (1642): these are strong men ostentatiously celebrating their independence and their wealth with deeply felt optimism. As far as the painting's composition and balance are concerned, I recognize a great deal of congruence in how Rembrandt and Neo Rauch approach their work, both of whom position a number of people on the canvas with such accuracy that it seems as if they represent the ›theatrum mundi.‹
This is what makes up the greatest congruence between the two artists and likewise the manifestation of what great painting means for all of us. Yet there is also a difference: Rembrandt painted the mayor of Amsterdam, Frans Banninck Cocq, within the scope of his office as the principal citizen of the most powerful city in the world. The painter and the father of the city's inhabitants were riding high on the waves of success in a world that seemed to be very easily understandable, in any case from their point of view. The painting constituted the entrenchment of this perception. At the time, those being depicted may not have dealt very intensely with their own mortality, yet they will have been aware of the idea of possibly being able to overcome it through ››The Night Watch‹‹.
The apparent unambiguity of ››The Night Watch‹‹ constitutes a sharp contrast to the complexity of contemporary life and recent history. This may perhaps explain Neo Rauch's penchant for the beauty and humanity of the Enlightenment and the Romantic period. In the chaos of the wars and ideologies of our twentieth-twenty-first century into which, according to Martin Heidegger, we have been thrown, there is, as per precisely this same philosopher, one salvation only, namely the acceptance of our mortality. Hope shimmers in Neo Rauch's theater of the world with all of its antichronological intricacy. His recognizable, irresolvable complexity constitutes a window into immortality; it is like a biomorphic handrail that guides us to what awaits us at the end of our journey into the future.

Extract from the text ››The Figures Are Listening In‹‹ by Ralph Keuning, Director of the Museum de Fundatie, Zwolle, NL, from the catalogue ››Neo Rauch HANDLAUF New and Earlier Works‹‹, ed. Doris Apell-Kölmel, E. A. Seemann Verlag, Leipzig 2020. 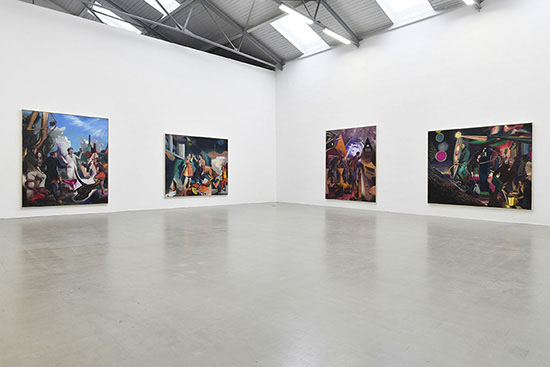